Yariv Levin, a confidant of presumptive future Prime Minister Benjamin Netanyahu, was elected speaker of the Knesset on Tuesday, paving the way for a swift legislative blitz demanded by Likud partners as a condition of forming a government.

Despite in-depth opposition attempts to delay the vote, Levin received 64 votes in the 120-seat body, allowing him to assume the role of speaker of the Knesset — a role he held in 2020-2021 — and control of take over the legislative agenda of the Knesset.

To meet coalition partners’ demands, Levin is expected to immediately vote on four key pieces of legislation: expand the powers of the national security minister – expected to be Otzma Yehudit chief Itamar Ben Gvir – over the police; to clear the way for a party leader who is serving a suspended sentence – Aryeh Deri – to head three ministries; to allow an ultra-nationalist from the Religious Zionism party, expected to be party leader Bezalel Smotrich, to become an independent minister in control of West Bank buildings in the Ministry of Defence; and to make it more difficult for rebellious MKs to break away from their parliamentary factions without sanction, a bill expressly desired by the Likud.

With Netanyahu still eight days to announce a government, he has yet to finalize a full coalition agreement with one of the three far-right and two ultra-Orthodox parties set to join the Likud in Israel’s toughest government yet, though he has partial agreements with them.

Although Levin’s appointment is intended only as an interim step to place a trusted and experienced hand in the speedy passage of the desired law, there are no formal provisions for an interim speaker of the Knesset. Rather, Levin was elected to a permanent position with the express understanding that he will step down from the role shortly before the next government is sworn in and will most likely become its Attorney General. 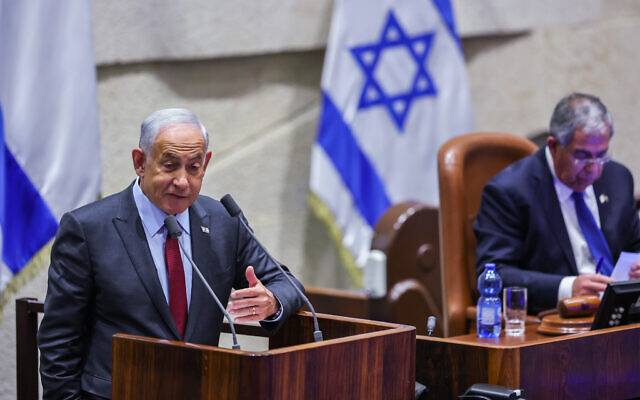 Netanyahu thanked Levy for his tenure as speaker of the Knesset and Levin for “doing this work for two weeks or however long it will take.”

Levin goes straight to work to begin the legislative blitz, and Levin is expected to arrange preliminary votes later Tuesday on the four bills called for by Otzma Yehudit, Religious Zionism, Shas and Likud.

Originally scheduled for Monday, Levin’s election was postponed a day after incoming opposition threatened a long filibuster. As a compromise, it was agreed to move the vote to 10am Tuesday morning, with the final results pushed back to 11am because Levy insisted on a manual vote.

Nonetheless, both the new opposition and the coalition contributed to a stormy discussion ahead of the vote, with mutual recriminations and inter-bloc heckling.

Incoming opposition MPs are also expected to attempt to delay legislation in committees.

Shortly before announcing the choice of his successor, Levy wished his successor good luck and called for the “dignity” of the plenary to be preserved.

“I hope he knows how to find the right checks and balances to protect the dignity of the legislature. I have great respect for this House, which is the beating heart of Israeli democracy,” Levy said.

“I hope MKs will continue to serve all citizens of the country with a sense of reverence and holiness,” he added.

Levin, who took office, gave a nod to Israelis’ desire for political stability after holding five national elections since 2019. “I will do my utmost to fulfill this task… [so] that a stable government can soon be formed in Israel,” he said.

Levin, a longtime proponent of judicial reform to limit the Supreme Court’s interference in Knesset legislation, added: “Considerable concerted effort will be required to strengthen the Knesset’s status as legislative authority – a status that has been badly damaged in recent times became.”

I came to The Times of Israel after many years of reporting on US and Israeli politics for Hebrew news outlets.

I believe responsible reporting on Israeli politicians means presenting a 360-degree view of their words and actions – conveying not only what is happening, but also what it means in the broader context of Israeli society and the region.

This is difficult because you can rarely take politicians at face value – you have to make the effort to present the full context and try to overcome your own prejudices.

I am proud of our work, which tells the story of Israeli politics straight forward and comprehensive. I believe Israel is stronger and more democratic when professional journalists do this hard work well.

Your support of our work by joining The Times of Israel Community helps ensure we can continue to do so.

Many Thanks,
Tal Schneider, political correspondent

Many Thanks,
David Horovitz, founding editor of the Times of Israel

The wildcard for the oil markets next week