The Secretary-General of the International Trade Union Confederation has resigned less than a month after taking office after admitting he stole thousands of euros in cash from the MEP at the center of a corruption scandal in the European Parliament.

Panzeri is at the center of an international investigation into allegations that Qatar and Morocco tried to influence EU lawmakers through bribes. He is accused of corruption and membership in a criminal organization. Visentini, who was released last week after 48 hours in police custody in Belgium, has denied any allegations of wrongdoing.

In his statement, Visentini said: “I have accepted a donation from Fight Impunity [Panzeri’s NGO] for an amount of less than €50,000 to reimburse part of the costs I have incurred to fund my campaign for the ITUC Congress and I have transferred the amount to the ITUC Solidarity Fund to cover the union’s travel expenses cover up [to Melbourne].”

“I accepted the donation in cash [because of Panzeri’s good reputation] and its no-profit nature. . . it was in no way linked to any attempt at corruption or aimed at influencing my position on Qatar,” he added.

Visentini is barred from contacting other suspects in the investigation and must seek permission from Belgian prosecutors to travel outside the EU for the next three months, the statement said.

Italian investigators are analyzing transfers to and from Visentini’s bank accounts and six other accounts linked to Panzeri and other suspects in the investigation. According to people close to the investigation, no evidence of wrongdoing by Visentini has been found so far.

Panzeri’s lawyer in Belgium declined to comment on the Visentini statement and other matters relating to his client. 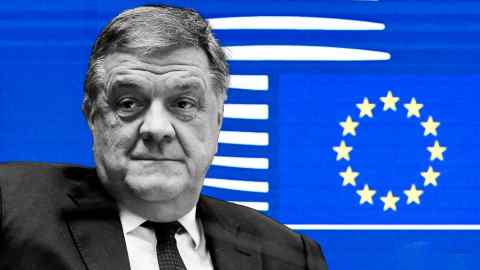 Before the arrests, activists had been scrutinizing the ITUC’s position on workers’ rights abuses in Qatar.

In the run-up to the World Cup in November, human rights group FairSquare wrote to outgoing ITUC general secretary Sharan Burrow to express concern that, in its view, the federation “does not speak out against serious abuses by the Qatari authorities”.

FairSquare said the ITUC was exaggerating the effectiveness of Qatar’s legislative reforms. In a video produced by the Qatari Labor Ministry in June, the ITUC General Secretary declared that the employment system was known kafalahthat essentially binds employees to their employer was “dead”.

Ccritics say kafalah is vulnerable to abuse and can lead to conditions akin to slavery. FairSquare said many independent human rights monitors have documented serious problems with the reform kafalah was “certainly not dead”.

“This is a deeply alarming development and requires an immediate and transparent investigation by the ITUC,” FairSquare co-director and migrant rights researcher James Lynch said after Visentini’s statement.

The ITUC said in a statement last week that from the outset its work on Qatar was “based solely on an objective analysis and assessment of the facts”.

“Any suggestion that any other institution, Qatari or elsewhere, influenced the ITUC’s position is completely false,” she added.

Doha has denied all allegations of wrongdoing.

Viking cruise passengers describe a wild wave that killed one