About 250 million people in China may have been infected with COVID-19 in the first 20 days of December, according to leaked figures from Beijing’s top health officials reported by US media.

According to information released by Bloomberg and the Financial Times, an estimated 37 million people contracted the virus on Tuesday alone, in contrast to official data that counted 3,049 cases on the day and 62,592 symptomatic infections in the first 20 days of this month.

Citing two sources involved in the matter, the Financial Times reported that Sun Yang, a deputy director of China’s Center for Disease Control and Prevention, presented the shocking figures at a meeting of China’s National Health Commission (NHC) on Wednesday.

It was unclear how the NHC came to its rapprochement as Beijing no longer counts asymptomatic infections.

China has been rapidly dismantling key pillars of its zero-COVID strategy this month, scrapping quick lockdowns, lengthy quarantines and travel restrictions in a jarring reversal of its typical containment strategy.

Cities across the country are struggling to cope as rising infections have emptied pharmacy shelves, filled infirmaries and appear to be causing backlogs at crematoria and funeral homes. 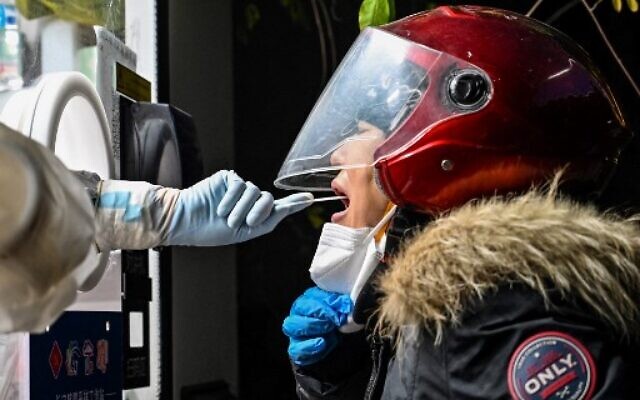 A health worker takes a swab sample from a woman to test for COVID-19, 23 December 2022 in Jing’an district in Shanghai, China. (Hector Retamal/AFP)

But the end of strict testing mandates has made it virtually impossible to track case numbers, while authorities have narrowed the medical definition of a COVID-related death in a move that experts said will increase the number of deaths attributed to the virus will suppress.

In a rare and quickly censored admission that the country’s wave of infections is not reflected in official statistics, a senior health official said Friday half a million people are becoming infected in the Chinese city of Qingdao every day.

A news outlet run by the ruling Communist Party in Qingdao reported the city’s health chief said the eastern city was seeing “between 490,000 and 530,000” new cases a day.

The coastal city of around 10 million is “in a period of rapid transmission before a peak is approaching,” Bo Tao reportedly said, adding that the infection rate would accelerate by another 10 percent over the weekend.

The report was shared by several other news outlets but appeared to have been edited by Saturday morning to remove case counts.

China’s National Health Commission said on Saturday that 4,103 new domestic infections without new deaths were recorded the previous day across the country.

In Shandong, the province where Qingdao is located, authorities have officially registered just 31 new domestic cases. 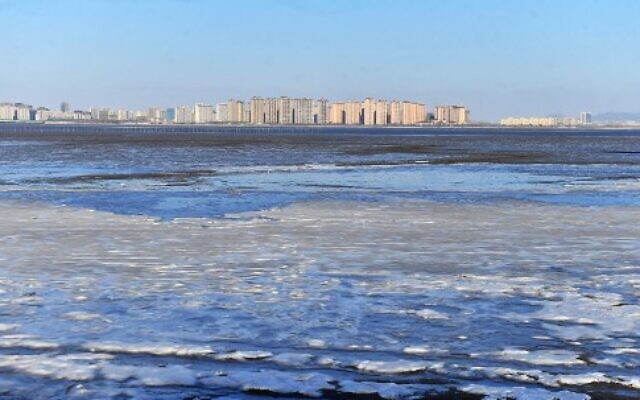 Most government-led publications have downplayed the severity of the country’s wave, instead portraying the turnaround as logical and controlled.

But some outlets have pointed to shortages of medicines and hospitals under pressure, although estimates of actual case numbers remain scarce.

The government of eastern Jiangxi province said in a social media post on Friday that 80% of its population — equivalent to around 36 million people — would be infected by March.

More than 18,000 COVID patients were admitted to major provincial medical facilities in the two weeks ended Thursday, including nearly 500 severe cases but no deaths, the statement said.

There were signs medical resources remained under pressure early in the weekend as some regional health officials warned the worst was yet to come.

Dongguan’s southern manufacturing hub said on Friday that outbreak modeling points to up to 300,000 new infections a day, adding that the rate is “accelerating at an ever faster rate.”

“Many medical resources and medical workers are under great challenges and tremendous pressure without historical precedent,” said a statement from the public health department in the city of 10.5 million people. 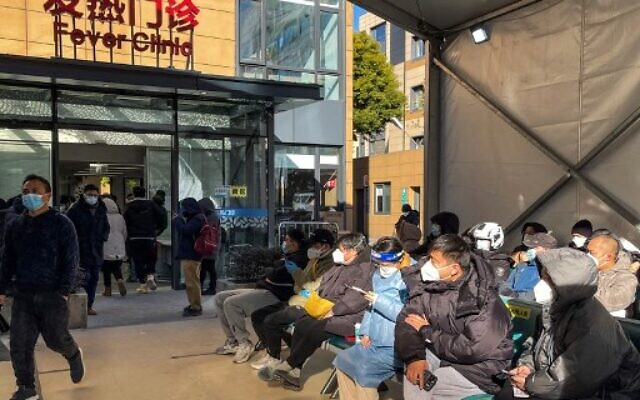 The bureau also released video showing patients hooked up to IVs queuing outside a clinic and a doctor sleeping on his desk after working late into the night for several days.

A senior health official in Hainan on Friday said the island province will reach the peak of infections “very soon,” while the eastern megacity of Shanghai has been treating more than 40,000 patients for “fever,” state-run newspaper People’s Daily reported on Saturday.

Authorities in Chongqing launched a campaign to vaccinate residents with inhalable vaccines as the central mega-city grapples with a major outbreak.

AFP journalists in the city of 32 million this week saw hospitals overflow with mostly elderly COVID-positive patients and dozens of bodies dumped in crematoria.

Thank you very much,
David Horovitz, founding editor of the Times of Israel

Sperm counts and concentrations have been declining worldwide since the 1970s, but impact on fertility unknown: study

I’m telling you, this little gift for her will make you look like a genius this holiday season