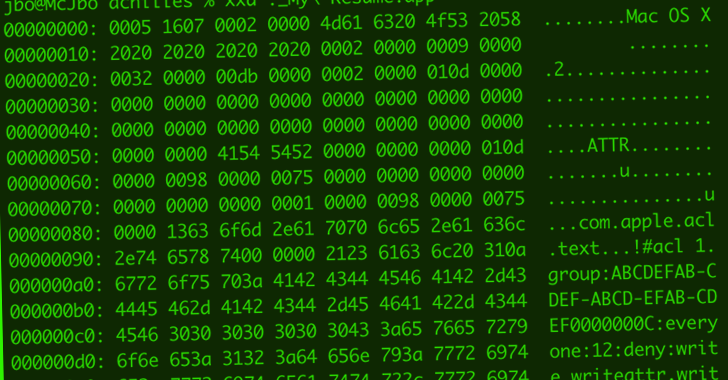 Microsoft has released details of a now-patched vulnerability in Apple macOS that could be exploited by an attacker to bypass security measures imposed to prevent malicious applications from running.

The shortcoming, called Achilles (CVE-2022-42821, CVSS score: 5.5) was addressed by the iPhone manufacturer in macOS Ventura 13, Monterey 12.6.2 and Big Sur 11.7.2 and described as a logic issue that could be weaponized by an app Gatekeeper -Bypass checks.

“Gatekeeper bypasses like these could be used as a first-time vector for malware and other threats, and help increase the success rate of malicious campaigns and attacks on macOS,” said Jonathan Bar Or of the Microsoft 365 Defender Research Team.

Gatekeeper is a security mechanism designed to ensure only trusted apps run on the operating system. This is enforced by an extended attribute called “com.apple.quarantine” assigned to files downloaded from the Internet. It is analogous to the Flag Mark of the Web (MotW) in Windows.

So if an unsuspecting user downloads a potentially malicious app that masquerades as legitimate software, the Gatekeeper feature will prevent the app from running because it is not validly Apple signed and notarized.

Even in cases where an app has been approved by Apple, users will be presented with a prompt to get their explicit consent upon first launch.

Given the crucial role Gatekeeper plays in macOS, it’s hard not to imagine the consequences of bypassing the security barrier, which could effectively allow attackers to install malware on the computers.

In a hypothetical attack scenario, an attacker could use the technique to create and host a rogue app on a server, which could then be delivered to a possible target via social engineering, malicious advertising, or a watering hole.

“Fake apps remain one of the key entry vectors to macOS, suggesting that gatekeeper bypass techniques are an attractive and even necessary capability for attackers to leverage in attacks,” Bar Or said.