Skip to content
January 25, 2023
Gaming
Almost four decades ago, the Commodore 64 was released and left an indelible mark on the home computing world. Today it still ranks as the best-selling single computer model of all time, with sales estimates of around 12.5 million units during its lifetime (some estimates are much higher but could be in error). Now, 39 years later, the Commodore 64 is back, and it’s a lot sturdier than the original model that shipped so long ago.
Not that the Commodore name ever really went away, it just changed hands over the years. There have been several attempts to capitalize on the nostalgia that also surrounds the C64 branding, such as the C64 Mini, a miniature replica with 64 games built-in, and a full-size reboot called TheC64 from the same company (Retro

What’s on offer now is completely different. It’s essentially an extension of the My Retro Computer after company owner Sean Donahue licensed the Commodore name to use on the brand new Commodore 64x that he’s offering on Kickstarter. It’s also a sequel to the modern remakes that Barry Altman, founder of Commodore USA, sold in 2010 until his death in 2012.

Part of Donahue’s goal is to make the Commodore brand a household name again, and that doesn’t come without drama. After the Kickstarter page went live, it quickly surpassed its funding goal of $30,722, only to have it delisted so Kickstarter could investigate a copyright claim. That claim turned out to be false, and the campaign is now up and running again.

This is the short version. For a longer explanation, here’s what Donahue says happened…

We’re glad everything got sorted out because this is a really cool project. Three models are offered: Commodore 64x Ultimate, Commodore 64x Extreme and Commodore 64x Bareones. The barebones model is essentially a keyboard slash case that allows users to fit a Raspberry Pi or certain Mini-ITX motherboards.

The Extreme model ups the ante with an Intel Celeron J6412 processor, 4GB RAM and 256GB M.2 SSD, while the Ultimate model is the most exciting with a Core i9 processor and a 4GB GeForce GTX 1650 GPU and most powerful of the bunch is VRAM, 8GB of system RAM, and a 512GB NVMe SSD.

Both the CPU and GPU are embedded and therefore cannot be upgraded, but the RAM is expandable to 64GB. There’s also an integrated docking station to add a 2.5″ SATA SSD or hard drive for more storage. Other features include an HDMI output, four USB 3.0 ports, two USB 2.0 ports, two LAN ports, a DB9/M port, a 3.5mm combo jack and an SD card reader. 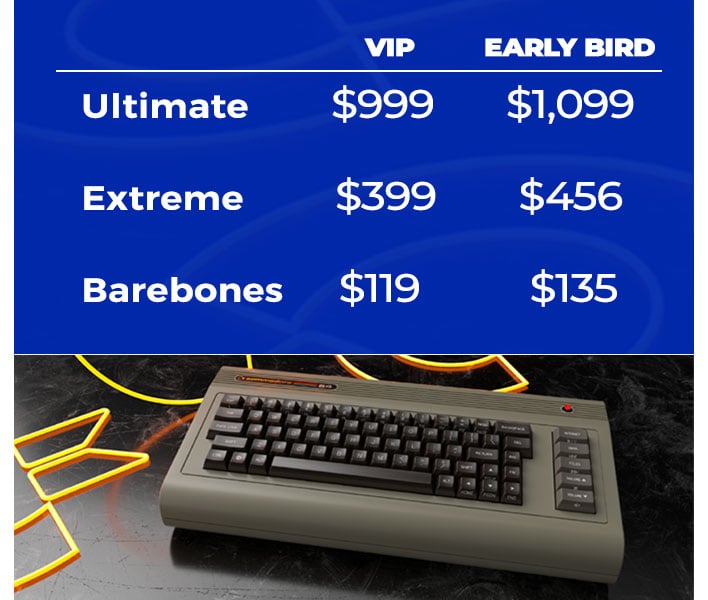 It’s obviously not the world’s fastest PC, but it’s certainly respectable and far more powerful than the original C64 from so many years ago. And the crowdfunding prices, as shown above, are pretty reasonable. Shoppers will still be able to choose from a range of color options after the campaign ends if you’re not nostalgic for beige.

Over 200 backers have pledged more than $81,000 at the time of writing, with 29 days remaining. You can head over to the Commodore 64x Kickstarter page if you want to join them.

What to look for in a gaming PC

The gaming PC upgrade cycle is a myth. Here’s why