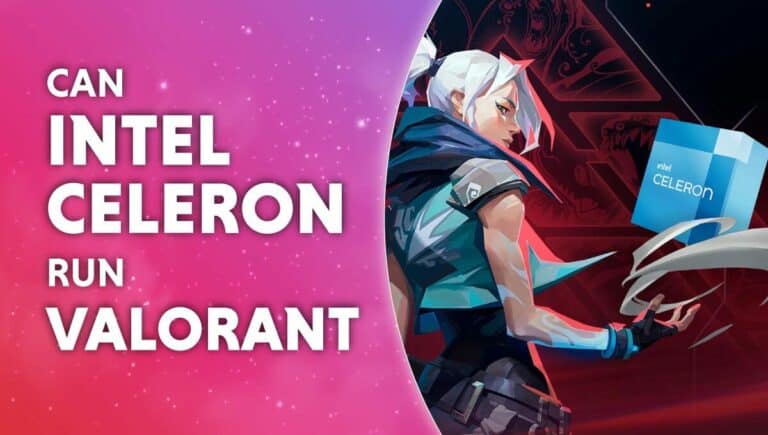 Valorant has taken the first-person shooter genre by storm. It has grown tremendously in popularity since its release. Many competitive players from CS:GO, Overwatch, Fortnite and other popular games have switched to Valorant. Given the popularity of Valorant, you wanted to try it too. Can Intel Celeron run Valorant?

Since you’re here, you probably have a Celeron processor, and you might be wondering if it can smoothly ruin Valorant. Valorant is a CPU intensive game. Therefore, to run Valorant smoothly at 60 frames per second, you need a decent CPU.

These are the minimum requirements for Valorant.

These are the minimum requirements to run Valorant. However, you will probably get close to 30 fps or even lower at times.

These are the recommended requirements for Valorant.

Just looking at the minimum specs, it’s clear that Celeron can’t run Valorant. Even the latest Celeron can’t compete with the Core 2 Duo, which is a decades-old CPU. We can say with confidence that if you want to play Valorant on Celeron it will not work.

Despite the fact that according to the specs, a Celeron cannot run Valorant. However, we continued to run tests to see if some small upgrades would work. We tested the Celeron with integrated graphics and 8GB of storage at 720p. We tried everything, even optimized the PC to get as much performance as possible, but we still couldn’t get a playable game.

After that failed attempt we installed a GT 730 to see if the GPU could get the job done. We were able to get 30 frames, but the CPU still couldn’t keep up; The game was stuttering and the input lag was bad too. All of these tests were run at 720p with 60 frames per second locked.

So can Intel Celeron run Valorant? Just looking at the minimum specs and after testing, we can say with confidence that Celeron cannot run Valorant. Celeron is typically built for Chromebooks and netbooks; They are designed for browsing and simple tasks, not gaming. We would recommend upgrading to at least a Core i3 processor and pairing it with a GPU like the GTX 1650 Super for a good experience.

What to look for in a gaming PC