Minecraft can run on pretty much anything, but is that really true? 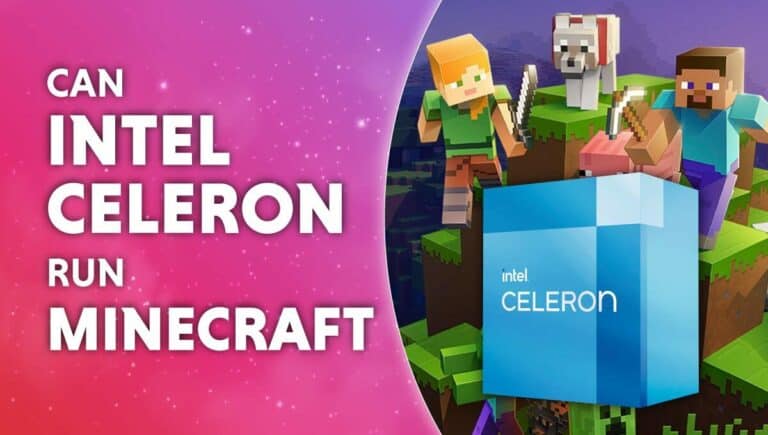 Minecraft is one of the memorable games of the past. But it has become popular again. Several experienced YouTubers have started uploading Minecraft videos. Due to the popularity of Minecraft, many people have decided to play this wonderful game again because it brought back fond memories of their youth. But can Intel Celeron run Minecraft?

Maybe you fit into that category too, or maybe you were inspired to play the game after hearing everyone else talking about it. You may have an outdated computer with a Celeron and are wondering if it can run Minecraft.

We’ll help you find out if your old Celeron processor can run games.

These are the minimum requirements to run Minecraft.

These are the recommended specs to run Minecraft smoothly.

Just looking at the minimum specs, it’s clear that a Celeron can’t run Minecraft. Even the newest Celeron cannot keep up with the Intel Core i3 3210 that was released almost nine years ago. We can say with confidence that if you want to play Minecraft on Celeron it will not work.

Minecraft is very well optimized. By changing a few settings, we can easily output a few frames per second, and that’s exactly what we did. Even after optimizing the settings, the performance of Minecraft on a Celeron with 8 GB RAM and integrated graphics was below average.

Then, with all the settings down to low, we were able to get 30-40 stable frames per second after installing a budget GPU like the GT 710. Keep in mind that these results were obtained at 720p; You may be able to increase the number of frames per second by lowering the resolution even further.

So can Intel Celeron run Minecraft? A Celeron processor can run Minecraft, but only at very low frame rates and with poor video quality. If you’re willing to put up with low graphics, that’s fine, but if not, we’d recommend at least upgrading to an I5 2400 processor and a GT 710 or GT 1030.

Lenovo Black Friday in July: Save on Legion Gaming PCs and Laptops